Jerry Garcia’s credits continue to grow year after year, beginning in 2016 with Fox’s Laughs comedy series. In 2017, Jerry made his Netflix debut co-starring in Chingo Bling’s “They Can’t Deport Us All” Comedy Special. In 2018, Jerry continued to rise as he made his HBO debut on “Entre Nos” Comedy Series. A stand-alone HBO Max comedy special appropriately titled “It’s Not My Weekend” premiered in the summer of 2019. Earlier in 2019, Jerry crossed over to voice acting as he co-starred alongside John Stamos in the animated film Ploey.

Luz is known as one of the top Latina comedians. She recently had an HBO special and was a finalist of the prestigious NBC stand up for Diversity. A native of Peru, she now resides in Hollywood and can be seen on the HBO show the Garcia’s.

Quick View
Out of stock 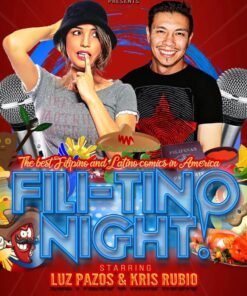